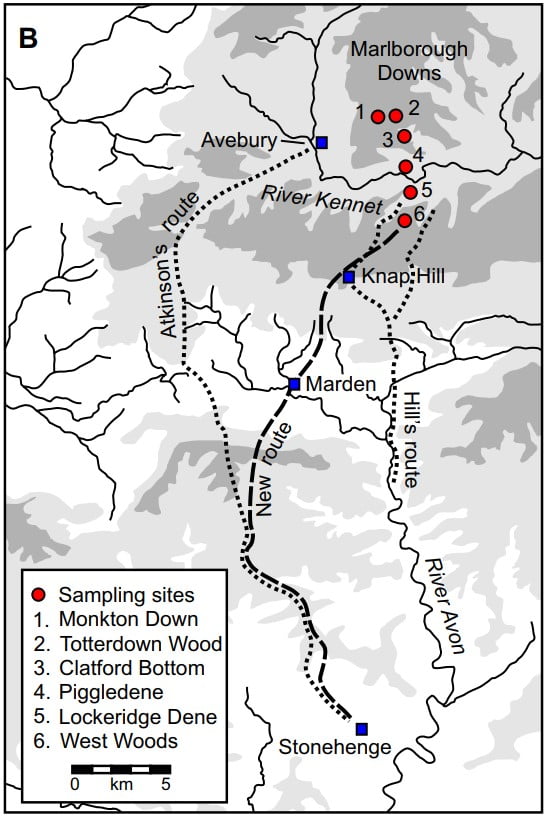 The fingerprinting of the sarsens of Stonehenge is fascinating. Though it took nearly three years and was a year late.

Seems that most of them are of the same type and probably from the same area. Even the Heel Stone! Which, as it is undressed and there’s a pit close by that it could have been pulled from, is surprising. As well, I thought there were at least two types of sarsen, orange and purple. But this seems to be unimportant — now.

Sarsen is a pretty whacky type of stone, with palm tree root voids, larger crystals, voids filled with crystals. They sweat in damp weather and are really, really hard. And… Occur naturally in trains down valleys.

Though outer ring S26 and T5’s lintel S160 are different. T3’s lintel S156 is possibly different. And we don’t know about the missing 28 other stones. These could be from Stonehenge itself, local or anywhere over SE England. There are two large pits, one near the Heel Stone, one central to the circle, where some think a large sarsen could have been pulled out of.

Drum roll… North, 25km in a direct line No 6 in this diagram map, a place called West Woods (no motorbikes). About 5km south of where everybody thought, at Marlborough Downs.

My own virtual tour via Street View, I spy stone walls, possibly made of sarsen. No doubt the roads’ ballast are, too.

“Overlooking the Kennet Valley to the north, West Woods covers a 6km2 area and comprises a plateau rising to 220m above sea level that is dissected by two narrow valleys. The area once contained a dense concentration of sarsens, including a sarsen train mapped by the Ordnance Survey as recently as 1924. Most of the stones were broken up and removed from the mid19th century onward. However, many large boulders remain, both in valleys and on high ground, and sarsen extraction pits are common, particularly in the northern woodland. West Woods lies within a concentration of Early Neolithic activity, being close to Avebury, numerous long barrows, and the causewayed enclosure at Knap Hill. Evidence of Mesolithic through Iron Age occupation has been recorded in the area, including a 40m long Early Neolithic chambered long barrow, sarsen standing stones, a sarsen polissoir used to sharpen stone axes.”

Sadly, there are no whoppers left, anywhere. None of the size of the uprights of the inner horseshoe. All since eaten by man.

So, why there? Magical, political, economic. Easy access, large whoppers. All speculation.

Why West Woods and nearly all from West Woods? At the time, there would have been other stores of very large sarsen, probably closer, too. I had imagined this study would have shown they came from several places over a longer generational time, say 20+ years. But, they think as they nearly all came from the same area, likely it all happened in the same shorter period.